The Barn Completed - EIFS and All! 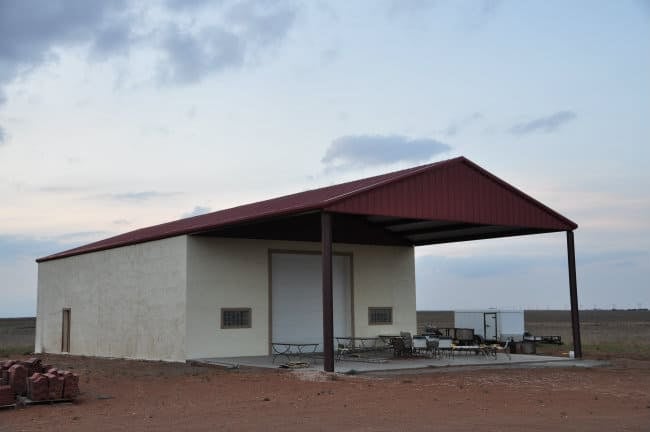 Yippee! The EIFS on our ICF barn is now compete! For a chronological listing of our building projects with ICF (or insulated concrete forms), be sure to look through the ICF Building Index. It looks as though I am speaking in code doesn't it with all the acronyms! Here is the code:

When I shared weekly the updates on the ICF filter house and the ICF greenhouse, each week was a progression of steps. So, I thought for the barn, I would just post pictures that had been taken throughout the process. Here is how the barn looked after finishing the ICF walls, filling them with concrete and having the roof put on: 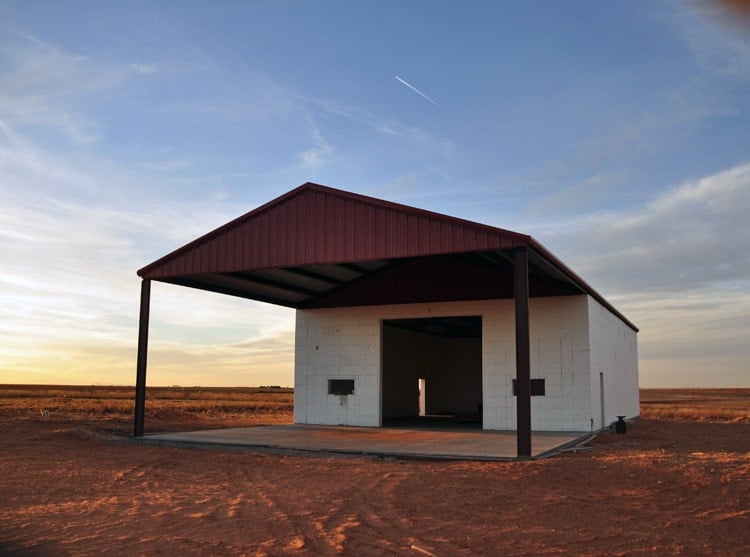 As you can see in the first picture of the post, it now looks quite a bit different! It is amazing how much more finished it looks with the EIFS covering the insulated concrete forms and the trim in place! The barn was different from the filter house and greenhouse because the walls were 16 ft. tall! So, to reach the upper levels, John and the boys put together pump jacks. Pump jacks are attached to two 2" x 4" pieces of wood that have been nailed together. As you can see from the picture, the pump jacks go all the way to the top of the barn. 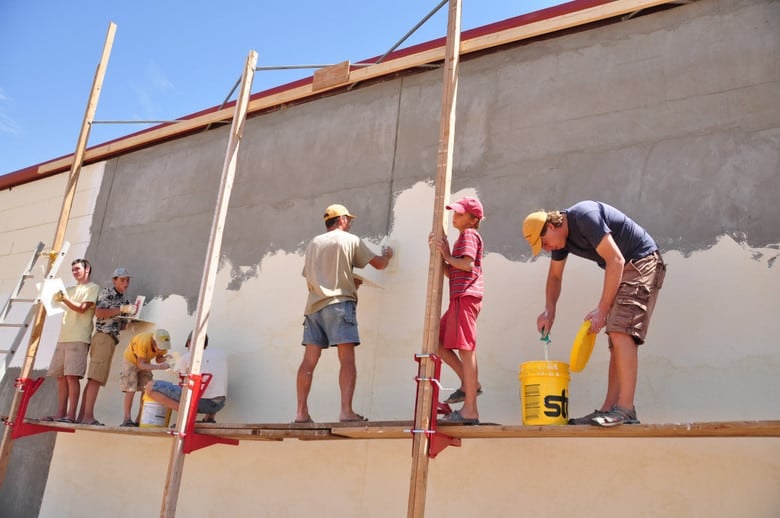 At ground level, the wood of the pump jacks is slightly dug into the ground providing stability. At the top of the barn, the pump jacks were secured with metal bracing that were actually pieces to be used in the greenhouse for bracing and shelving! The length of walk boards used totaled 30 ft. long so each of the long sides of the barn were done in two separate steps. Using our portable cement mixer to mix, the first coat of cement and fiberglass mesh were applied to the section being done in one day. 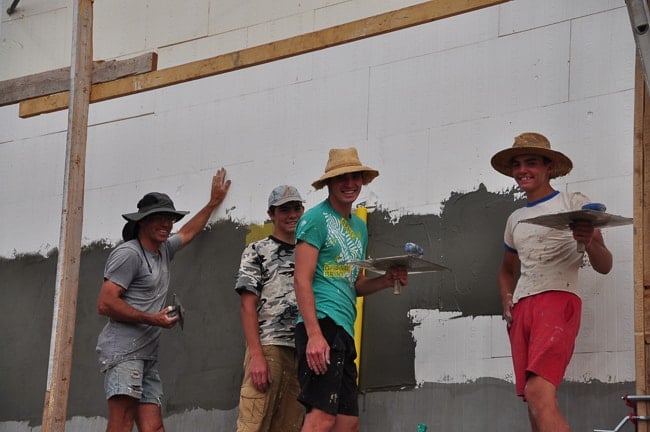 The next day, the color coat was applied then the scaffolding was taken down and moved to the next section to be done. 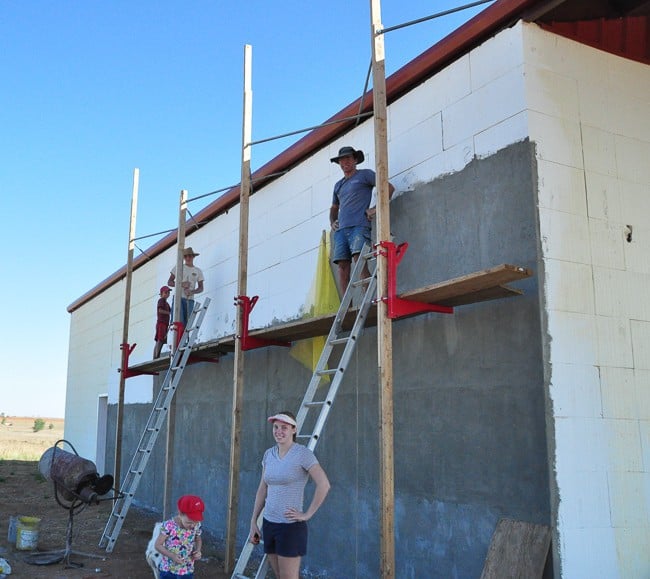 The biggest difference came when the wall changed from the grey cement color to the pale yellow of the EIFS! As you can tell, it was a messy job! 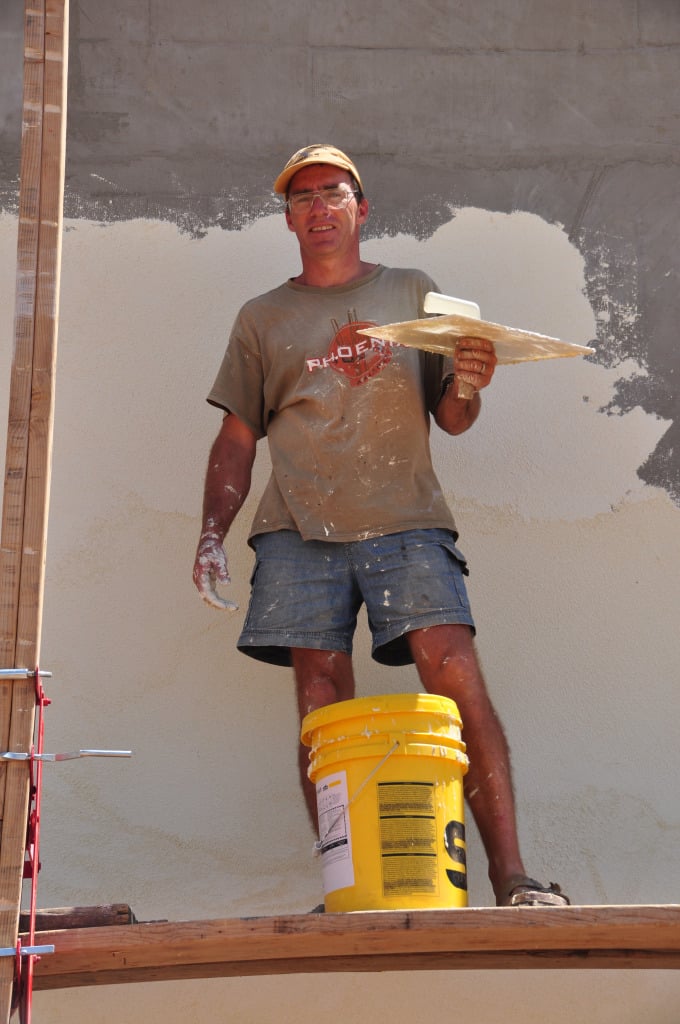 But, on the front side of the barn, the pump jacks could not be stabilized because of the concrete pad. So, ladder jacks were used. I can tell you from watching John and the boys, they are not as stable as pump jacks. When one person walked, everyone steadied themselves - you can see our son in the center of the picture below holding on to the edge of the metal trim! Personally, my feet are made to be on the ground! I did get on the pump jacks just to prove I could do it, but as soon as that was done, I was down! Afraid of heights? Guilty! 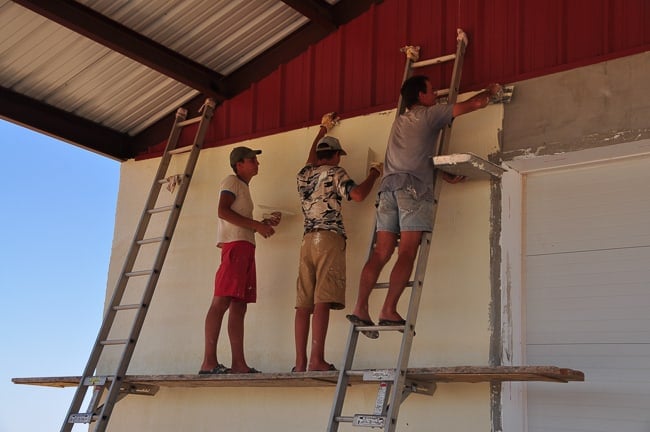 The light brown trim is 1/2 inch styrofoam board, cut to size and covered with the EIFS - the first coat with the fiberglass mesh embedded into the cement and the next day the color coat applied. 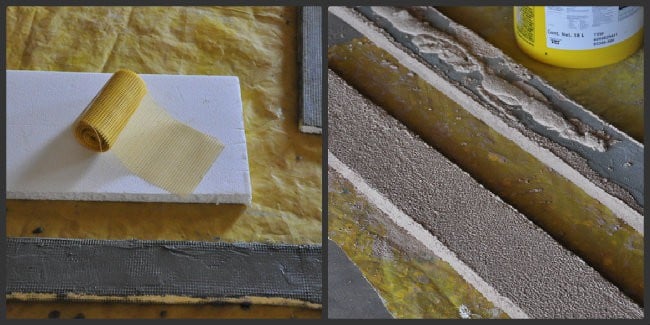 Once the EIFS dried, the trim was cemented into place and held for a few minutes until it was secure.

We are all glad the barn project is finished and we like the way it looks. Now, on to de-budding the vineyard!