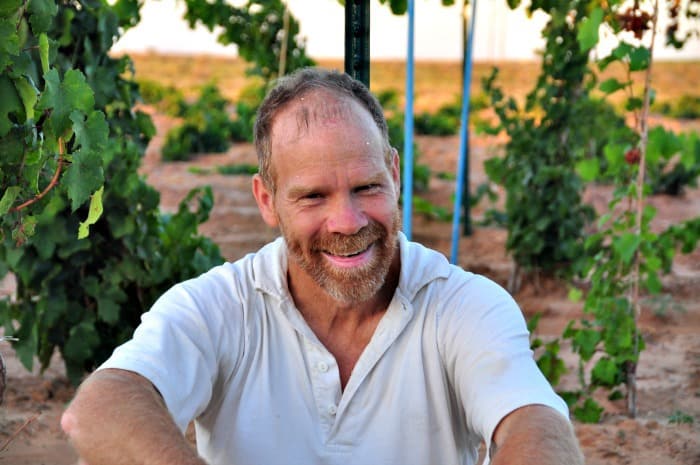 You might remember Joe, John's older brother who has visited with us many times and each time we work him almost to death! Despite all the work, he comes back! And, he has been with us now for almost 2 weeks. It is amazing that he can put up with us AND the work for such a long stretch! Joe lives in Tennessee and actually plans his vacation to be here during strategic times. He, like the rest of us, really enjoys harvest. And, while he has been in on the last couple of Roussanne harvests, he will miss the two largest harvests - Montepulciano and Aglianico. We will probably harvest these last varieties in a week or so. Once tucking the grapevines was completed, we began to hoe the vine rows between the vines and then using the tractor, the centers of the rows are cultivated or tilled which kills the weeds. This is where we, and Joe, are now - hoeing. There are two reasons we decided to hoe. No, exercise is not one of them but it certainly is that! The first reason was to get rid of the mound that has grown in the vine row from previous cultivating. As the tractor tills downs the center, dirt is thrown to either side which has created an ever growing mound under the vines. The second reason is to get rid of weeds without spraying. Since we are so close to harvest, we are limited as to what can be sprayed. So far, about half of the vineyard is done and looks great! Our plan next year is to go no-till, meaning that we will no longer do any tilling either in the vine row or down the center. Tilling does, to some degree, disturb the micro-environment of the soil. Here is a vine row which has yet to be hoed or tilled.

Tadaaaa, here is the result of our effort - big difference! 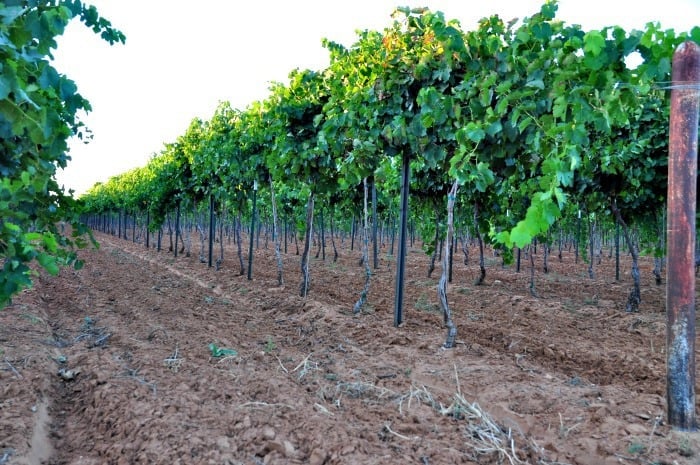 You might have guessed that with such a small harvest this year (thanks to the late freeze which killed buds) we will not be making much wine ourselves. But, after the last Roussanne harvest, we did a test run through the Montepulciano with the Pellenc harvester to see if we could harvest only the ripe grapes. This might sound funny because normally the vast majority of the grapes ripen at the same time. But, not this year! The big problem this year is with the remaining primary buds and the secondary buds ripening at different times. Maybe I should explain - each vine potentially has 3 sets of buds. The first to bud are called the primary buds. These produce the fruit (grapes). With the late freeze, many of the primary buds were frozen which prompted the vines to put out secondary buds (or second set of buds). If these were also frozen, the vine would put our tertiary buds (the third set). The result of having the primary and secondary (and even some tertiary) buds so mixed is ripe and unripe (or green) grapes on the same plant! Our solution - wait to harvest until the average Brix of the two is acceptable to the winemaker. After the test run with the harvester (which by the way showed that we could not harvest one set of fruit and later the other), we were left with Montepluciano grapes. These Montepulciano grapes were dumped into a bin for our own winemaking. Do you remember the episode of "I Love Lucy" when Lucy and Ethel stomp grapes? I could not help but think of that hilarious episode as I played Lucy (or maybe I was Ethel) and stomped the grapes with my feet. 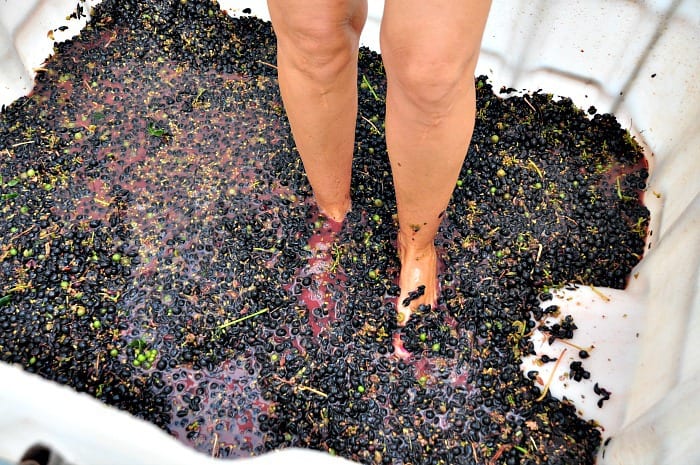 Just in case you are wondering, I did wash and sanitize my feet  first - It was fun!