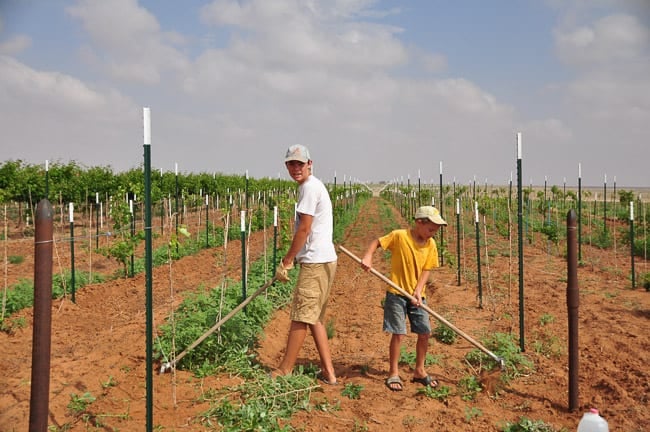 Since all the de-budding of the vineyard is finished, you might think that we can just kick back, put our feet up and eat bonbons. But, that is definitely not the case!

The major work of the summer is normally training the young vines. This year, there is not a lot of training to do for last year's planting and it remains to be seen about this year's planting.

Training the vines is the process of removing all but the strongest shoot and tying it to a piece of bamboo - training it to grow straight up to the cordon wire. Once it reaches the cordon wire, the two best shoots are selected to form arms which are tied (or trained) to the wire to run horizontally forming arms. The May 1st freeze was so damaging to these young vines that their growth is stunted. With this in mind, we will probably not do any training but just let them bush in an effort to build the root system.

So, you might wonder, what else is there to do?

Weed control is a big issue because if allowed to grow, weeds rob the vines of water. In the older vines, tilling the ground takes care of most of the weeds (tumble week, white weed, iron weed, mares tale, watermelon weed and even daisies). And, even though we spray as little as possible, we do spray using our Bubco. The Bubco is a spraying rig that allows growers to use much less of whatever chemical is being sprayed and because of its design, there is no drift - meaning the wind (even a slight breeze) does not carry the chemical anywhere else other than where you want it applied. The Bubco delivers the chemical directly onto the weeds near ground level and has fringe like hairs that sweep away any excess.

But, in last year's planting and this year too, the vines are too small to attempt spraying even with the Bubco. So, that means we get to hoe - what a privilege! 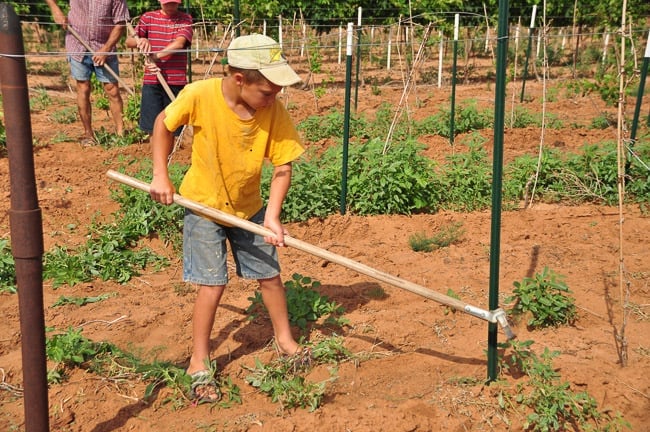 Now, you may think, "you poor people - out in the heat (temps in the high 90's), having to work sooo hard, sore backs, arms and shoulders, sweating ..."

And, I think all of us have thought the same thing! But, in the cool of the air conditioned house, the benefits of hoeing come alive!

After all, we have no need of a gym membership! We get free exercise - a total body workout at that! - fresh air and loads of sunshine which equals vitamin D, plus, lots of family time!

The boy's like to quote from the Navy Seal's, "pain is weakness leaving the body!"

There is NO doubt about it, I have a lot of weakness!