This year, we are trying something new in the vineyard, maybe I should say "something else" new - grapevine propagation. The vines we purchase are grafted vines. This means that one type of vine is used for the roots (rootstock) and another for the fruit variety to be produced (scion). Normally, a hardy vine whose roots grow fast and strong does not yield the best fruit, if any. Conversely, the grape varieties producing the most desirous fruit, are normally more susceptible to disease and overall not as hardy. There are many different types of rootstock available which the grape grower can choose based on various characteristics. For example, we like those which are nematode resistant, drought tolerant and compatible with our chosen fruit wood.

When we purchase grafted vines from Novavine (our nursery of choice), we pay not only for the vine itself, but also, royalties for the rootstock. Our agreement states that we may not propagate new vines for use other than those we need to replace in our own vineyard.

Over the years, one particular rootstock that we used in the vineyard has turned out to be not as good a fit as we hoped - about a third of those original vines have died since we planted them four years ago. Novavine has helped us and over the years has provided replacements (free or price reduced). This year, we want to replace the dead ourselves (about 600 plants) with a different, stronger rootstock also used in our vineyard.  We will let the rootstock grow two years - so it can catch up to the neighbor plants in the row. When its root structure is developed, we'll graft the fruit wood to it.

You can see in the picture below a rootstock plant (unpruned) that is already growing prolifically. (We'll try to graft this plant with new fruit wood in the next weeks.) 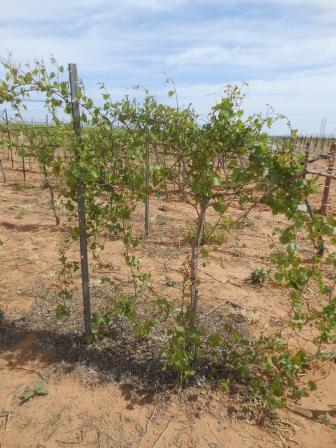 While we were pruning the vineyard this year, we kept 12" - 18" cuttings of rootstock plants (like that above, yet still dormant). These cuttings were buried into a "nursery row"  to keep dormant. 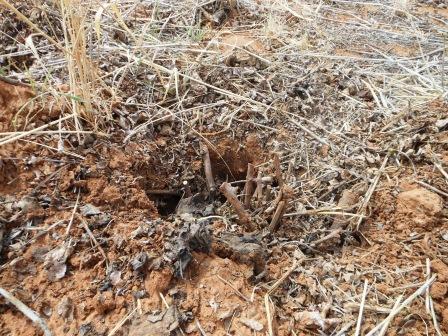 Now as spring is upon us and the vines are budding out, the cuttings were dug up and given a drink in a bucket of water. 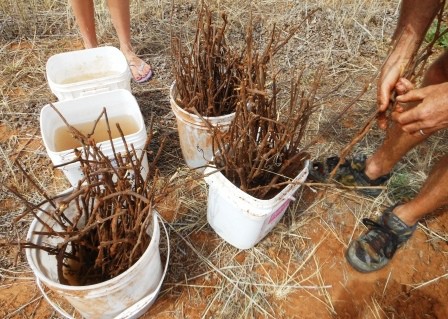 You can see the small buds coming out of the side of the twig - they are white with yellow tips.

At the replacement site, we dug out the dead vine and roots and formed a bowl of dirt with a shovel. We rented a  water drill (from a neighboring grape grower) and used it to deepen the center while filling it with water. 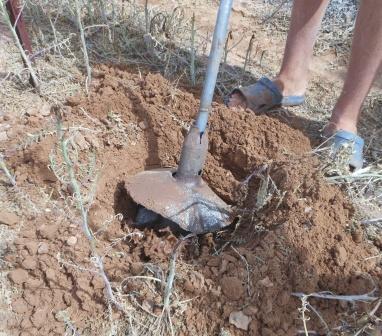 This farm-made water drill, is just a piece of steel pipe with teeth welded on the end like a drill bit. Water is pumped out the center while you wiggle/twist the handle to cut into the dirt and make the hole. 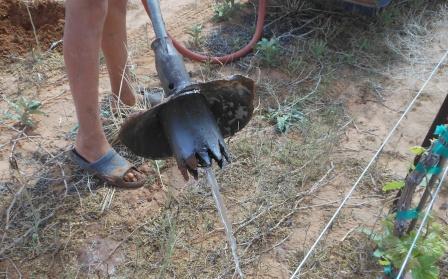 The rootstock twig is placed in and dirt filled around. We added enough dirt to leave a 6" or so depression - for watering later in the summer. A 5 ft piece of bamboo is stuck in next to the newly planted twig. As it grows, the twig will be tied to the bamboo for support until it reaches the cordon wire. 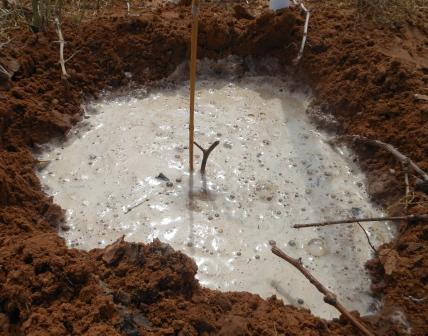 Needless to say, everyone is involved and there is a job for everyone! That seems to be the way of vineyard life! 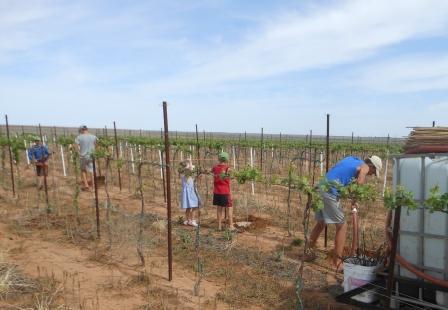 Everyone, that is, who is anyone, And, Bob is not! He just relaxes in the shade, which for the moment, happens to be under the wheelbarrow full of wire clips! 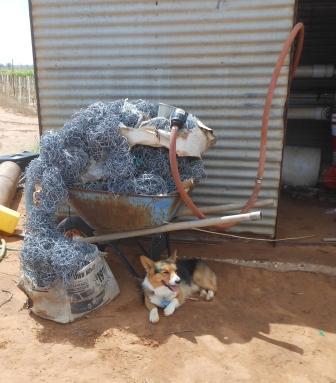