The wood for the interior walls and framing were delivered. For a chronological listing of our building projects with ICF (or insulated concrete forms), be sure to look through the ICF Building Index. The events subsequent to the delivery sure brought back memories. Home Depot gave us the best price so, it was a no brainer - we went purchased from them! Everything was delivered on a semi and unloaded without a problem. The children were so excited to be able to play on the stacks.They do not realize yet, how much work those stacks represent! I'm not gonna tell them either. 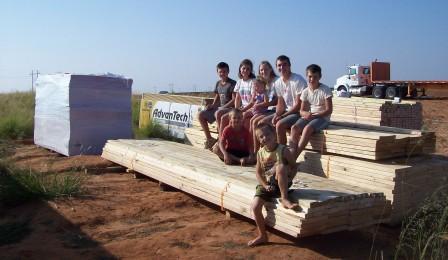 The truck turned around to leave and we were all waving. And, then, the unthinkable happened! 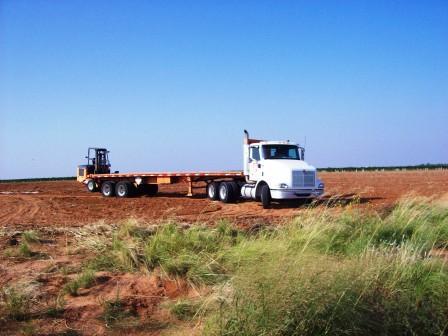 If you have not guessed what happened next, look where the front wheels are ... doesn't the dirt look soft? Well, it was! 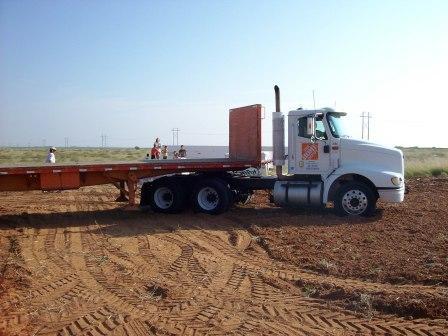 When we lived in Alabama, we lived in sand. It was a given, that trucks delivering building materials were probably going to get stuck. But, we did not think there would be a problem here in west Texas! Memories, memories, memories! John got to be very good at helping get trucks (and our 15 passenger van that I got stuck) unstuck. Here is his secret. He had the driver rock forward while he and others put boards as far under the wheels as possible. This trick works also with sheets of cardboard and rocks, You just have to give the tires something to grab on to. 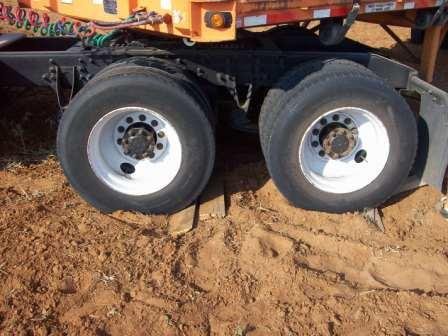 I am thankful to be able to tell you that John's trick worked even in west Texas. Goodbye! And, thanks for such a good attitude!