Waiting for Birth - Signs of Calving 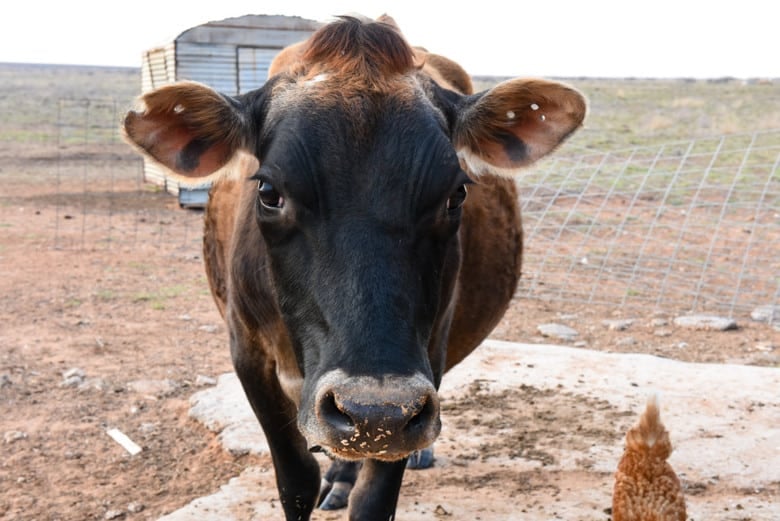 Oh the excitement of it all. The anticipation of the event. I can't contain myself. After all, we are talking about a new life - a birth in the barnyard. Ha Ha! You thought I was pregnant and had not told you didn't you? I should have thought about this as an April Fool's  post - just think of the fun that would have been - another child making a total of 11! No, - it is not me, it is Margie, our family milk cow. I caught her in the photo above after eating some grain - you can see a few pieces are still on her nose! When we bought Margie, she was already bred with her second calf. "Bred" is cow lingo meaning that the cow has been mated with a bull and is pregnant. She had been bred to a Jersey bull and due to calve in late March. Except, March has come and gone. Not wanting to be an alarmist, I and the rest of the clan are watching and waiting. That is the hardest part. We are all ready for fresh raw milk, ice cream dinners and fresh cheese. You probably know the signs of birthing a child but how about the signs of calving in dairy cows? Just like there are signs of impeding birth in humans, cows also show signs that their time to calve is close. Cows have a cervical plug that dissolves about 2 weeks before calving and may be seen as a large blob of mucous. The cervical plug helps protect the calf during the pregnancy. As calving grows even closer, more mucous appears. Margie was very patient as I snapped photos of her and was obviously curious as to why I was squatting down behind her - she kept turning around to see, making the photo session a bit difficult. Cows normally stand with their tail down so, I had to wait until she flicked her tail as she was shooing a fly. One of the first signs we notice indicating that calving is close, is the cow's rear end (bottom, hiney or whatever you want to call it!) is swollen. OK, technically it is called her vulva but that is not a term that easily rolls off my tongue. But, that is what it is called and I don't want you to be ignorant. So, from here on out, I will refer to it as her "rear end" - that sounds more "cultured" to me for some reason!

You may notice that the cow's hips begin widening in preparation -- it appears that the base of her tail is sinking. Her belly will also begin to change shape a bit as the calf moves backwards. We have not seen the mucous plug but she is having mucous. And, she looks more pregnant as her belly changes shape. Once again, I am amazed that this transplanted city girl is excited about a cow's swollen and bulging rear end! Remember, I am squatting behind Margie, trying to get just the right shot to show you that is also in focus. By this time, she is getting a bit tired of having her rear end photographed. However,  I do want to show another one of the signs of calving in dairy cows - a swollen milk bag and udders. 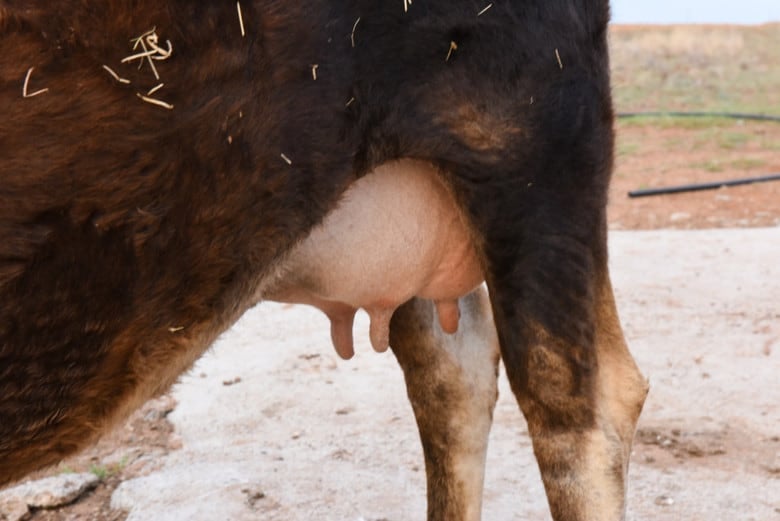 Her udder is swollen and more firm as are her teats. We call them "teats" because talking about Margie's nipples just doesn't seem right. The swollen udder (the bag that holds the milk) shows that it is filling with milk (or colostrum) in preparation for calving. Colostrum is made by the cow for the first 3 days after calving. It is filled with antibodies to help protect the calf from disease. One interesting fact is that a calf must have colostrum to seal and close its intestinal tract or it will die. We are continuing to watch Margie closely for any other signs of calving. She and LBC (a steer being raised for meat) normally graze and stay together in the pasture. When calving approaches, she will probably go off by herself. Other signs could be restlessness, discomfort and swishing her tail more frequently. Being around Margie every day, we know her personality and habits - we are ready! Especially after our postpartum crisis with Hilde, we know the importance of being as prepared as possible. And, even though Hilde's death was due to having been bread to a large breed meat bull, we do not want to take chances. One common postpartum problem especially with Jerseys is milk fever. Milk fever is a reduced level of blood calcium and usually occurs in the first days of lactation when the demand for calcium for milk production exceeds the body’s ability to mobilize calcium reserves. To help prevent milk fever, we are giving Margie a weekly tube of calcium (CMPK) with her feed. I have not tasted it but none of our cows have liked taking the calcium - it must taste terrible. But, it is an inexpensive way to avoid milk fever. That is it for now - we are watching and waiting. I'll keep you posted and let you know when we have a calf! Do you have any experience with farm animals - I would love to hear about it so leave a comment.