While we have little boys that love to pretend to be cowboys, we have never actually been up close to a real live one - until, that is, this weekend. It all started when I listed a heifer on Craigslist to sell. She is a 2 1/2 yrs old jersey heifer and is 7 months bred (pregnant) by a jersey bull. I bought her when she was 3 mths old thinking that by the time she was ready to calve, we would be ready for a second milk cow. But, we are not. She has been skittish since she was young, so, she would really make a better nurse cow than a family milk cow. Then again, once she calves she may become more personable. Anyway... Someone was interested in buying her (for a nurse cow) so we needed to catch her and put a halter on her. That is where the fun began! It would have been easy had we had a corral for her and not just an open pasture. Life is never easy is it? This heifer knows a rope and she knows a rope means loss of freedom for her. She would let you close enough to stroke her, unless you had a rope in your hand! John is good at slipping a lasso around a cows neck when he can get close enough but that was impossible with her. We chased and herded and 4 wheeled around her most of the morning. And then, we gave up! The next step was to call the vet to see if any tranquilizer would be safe for the calf. Using a tranquilizer gun, we were sure we could get her. No go! It would be unsafe for the calf. After a phone call, the cowboy pulled up with his horse in a trailer, saddled and ready to go! He even had spurs!

He rode the horse around the field for a few turns and then began to rope our heifer. They seemed to circle each other as if sizing up the opponent. 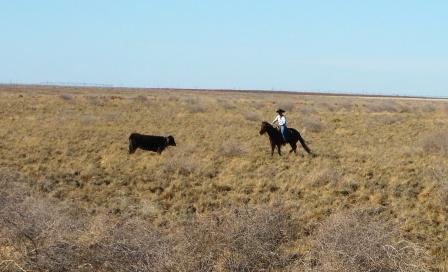 He made it look so easy! Only a couple of misses and she was lassoed! It was almost like watching a John Wayne movie in real like! 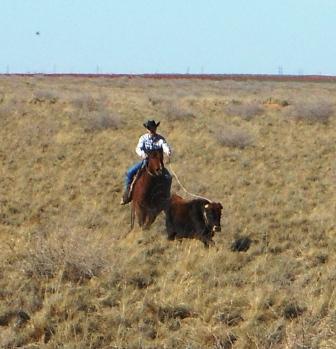 The cowboy then led her to where we wanted her tethered and showed the boys how to hold her down so John could put a halter on her. Mission accomplished! 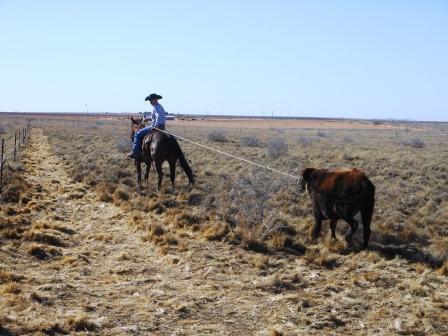 Once tethered, she calms down and you can get close enough to stroke her and feed her. The man from the craigslist ad did end up buying her after seeing how ornery she can be. Hopefully she will make a good milk cow for him. Guess what our boys did the rest of the afternoon? They practiced lassoing with a rope. They practices on each other, on toys, on their sisters. They actually got quite good! 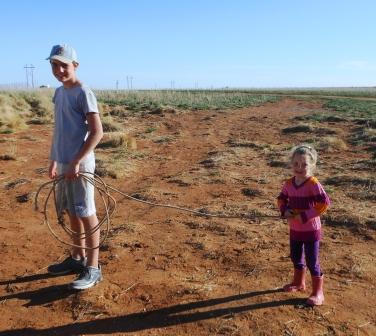