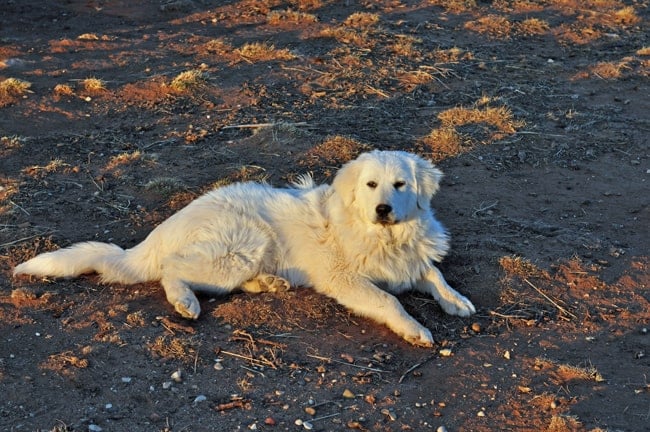 We have a new dog. Not just any dog - we have a new great Pyrenees. As I have shared before, we have a big coyote population here in west Texas. Not only are they a threat to our cows and chickens, but we have lost a dog and a cat to them. The day after our beloved Bob went missing, our 19 year old son shot a coyote circling the chicken pen which is not more than 100 feet from the house - in broad daylight about 7:30 in the morning! So, after looking for an Anatolian shepherd, a friend gave us Cotton, a 1 year old great Pyrenees. She had turned out to be the best defense against coyotes ever! She works all night, running from one end of the property to the other, making her presence known and keeping us safe from coyotes. Poor Cotton, she works all night and sleeps most of the day. After hearing her working throughout the night, we decided that the job was just too big and she needed a helper. I began to look on Craigslist but, I admit, I was very sporadic about it. Our oldest son, who faithfully scours Craigslist for "deals", emailed me one morning about a great Pyrenees - 8 months old and best of all - she was FREE! We picked her up the next day! Snowball has fit right in - after learning to submit to Cotton   ;) Snowball, Cotton and Sprinkles (a shih-poo) play together making quite a funny looking threesome! While we continue to prune the vineyard, the three dogs provide much entertainment with their shenanigans! One of the funniest things to see is Cotton and Snowball reaching up to eat the raisins off the vines. Since Sprinkles is too short to reach the raisins, we feed them to her. Snowball is still young and we have only had her for a couple of weeks but she is already part of the family!