ICF - What They Don't Tell You! 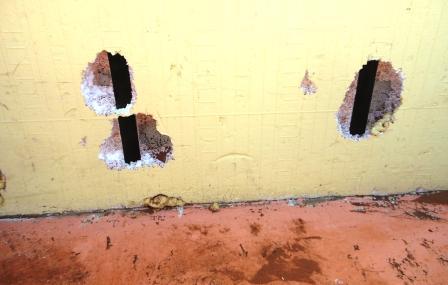 For a chronological listing of our building projects with ICF (or insulated concrete forms), be sure to look through the ICF Building Index. If you have been reading Cultured Palate for awhile, you know that we began construction on our home overlooking the vineyard in August 2010. We decided to use the Rewards Insulated Concrete Forms mainly because of their insulation value. We completed what will eventually be our basement and moved in the weekend after Thanksgiving, 2011. We have been very pleased with our ICF home except for one thing - something no one warned us about - chickens like it. Not only do our chickens like it, they LOVE it. Love to eat it that is! You read it right - our chickens love to peck and eat the styrofoam off the house! They have left holes along the lower edge exposing the supports which are built into the ICF blocks. The concrete which fills the ICF blocks is visible in several areas! We had temporarily painted the house yellow. Our plan is to put a stone facade on the walk-out basement wall. This will be after the upstairs is finished and dirt is pushed around to cover three sides of the basement making it a true basement. It might seem logical to shoot some chickens. But, we value their eggs! They lay their eggs in the morning and normally, we let them out of their pen in the afternoon to free range. We could not believe it when we first saw it happening. And, you would not believe the sense of satisfaction gained by running and shooing those chickens away from our house! I am sure we looked like people gone crazy. We are now taking precautions to keep them away from the house using barriers. As for the holes, John has filled them with Great Stuff - spray foam which expands. It looks unsightly but does offer protection from water seeping in the holes and flowing into the house. And, yes, that has happened :(

Hopefully, one day in the not too distant future, it will all be covered by dirt or stone. For now, it is one of those funny (yet humbling) things you would not believe unless you saw it!