Framing, TPO roofing, work, work and more work! For a chronological listing of our building projects with ICF (or insulated concrete forms), be sure to look through the ICF Building Index. If you remember, my brother-in-law leaves today, Monday.  He has been here a bit over a week and we have had so much fun! While he came out to help build the new house, I think he may have worked harder than he anticipated! These guys have worked every day, all day, until 7:00 in the evening. Our goals for the week included framing the walls and putting the roof on the basement. The goals were almost accomplished. Framing the walls were finished the early part of the week. They began the roof on Thursday. Since it will only be temporary until we add the first floor above, we are using TPO (thermo plastic olefin). It is a plastic flat roofing material which is very durable. My brother-in-law was able to get an awesome deal from a roofer so it was very economical. The progress on Thursday included a lot of thinking. Floor joists (roof rafters for now) were begun. Notice "the thinker" sitting and well, thinking! 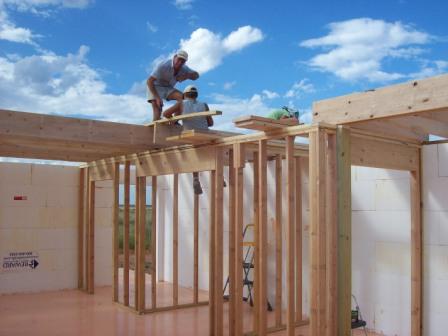 They were able to put up about half of them. 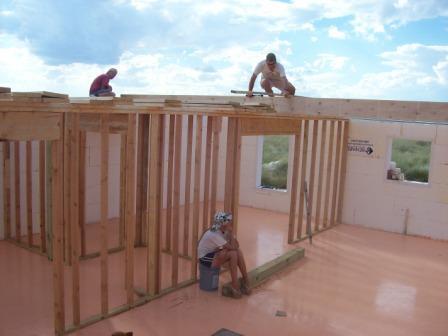 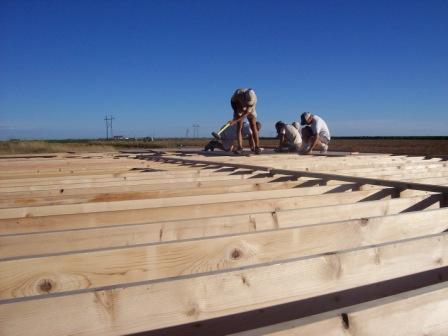 The decking was next. Plywood (we used Advantech) was nailed over the joists. 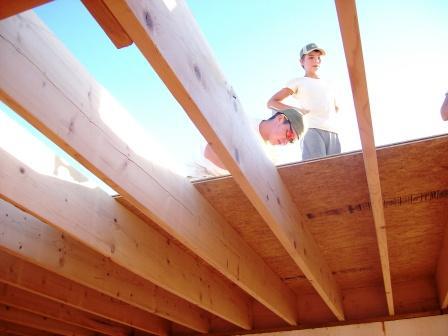 The decking was finished on Saturday. It is amazing how having a roof adds perspective to the inside. It gives size and definition to the rooms. It also makes a cavernous, echoing, loud space! I will definitely be using rugs! 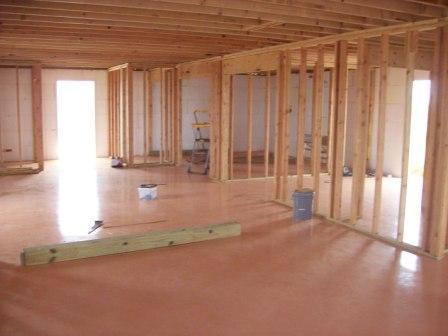 So at the end of the day, thinking was begun for the TPO roofing. Since we had several 10 ft sections as well as some scrap 3 ft pieces, how was the best way to lay it out? I know you are all sitting at the edge of your seats waiting to hear how we did it but ... I must leave you hanging. We have to get ready to go to the airport. The brother-in-law would be disappointed if he missed his flight. That would mean he has to continue working and I think he is ready to leave so he can get some rest! More later!