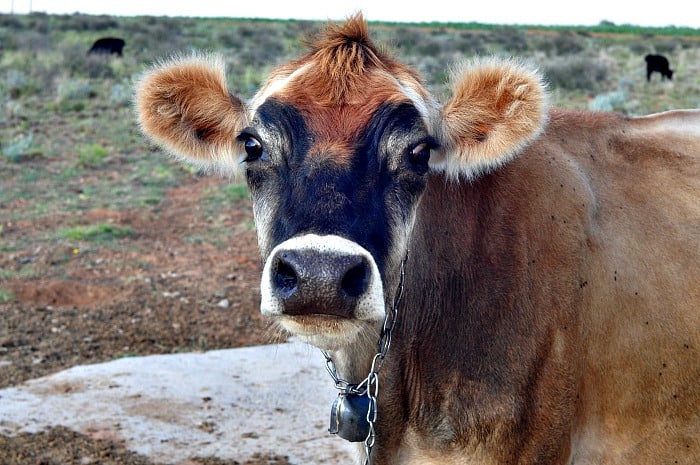 I thought I would give you a break this week on Family Friday's from the vineyard work/harvest and update you on our family milk cow, Emme. Well, almost. Let me just say before moving on to our escapades with a family milk cow, our last harvest is scheduled for tomorrow. We will be harvesting all of our Italian reds, Aglianico and Montepulciano, at one time. They will be harvested separately but since the crop load is so much smaller than normal (thanks to the late freeze) it is just not cost efficient for the winery to send an 18 wheeler twice. Plus, they are both ready to harvest. Now, moving on to life outside the vineyard and yes, we do have one   ;) If you follow our story, you already know about the trouble poor Emme had after Buttercup left. Both were much loved family milk cows but we have reached the point that we do not need so much milk and decided to sell Buttercup. Selling Buttercup caused such unrest in the barnyard - we could not believe how mopey the other cows were. But, after a couple of days, everyone was better - the mooing and sulking stopped. Everyone, that is, except Emme, our now, one and only family milk cow. Emme is full a Jersey with a very sweet disposition which is why most people choose a Jersey for a family milk cow. The first sign we had that something was wrong was the kefir taste - it was like sour milk - not only did it taste bad, it smelled awful. Then Emme's milk production went down to 1/2 gallon at each milking (am and pm) when she had been giving almost 1 and 1/2 gallons twice a day. Next, she got runny poop! She was plain sick! After several calls to the vet, I made a poop run. Now, for those of you who don't know what a poop run is, it is running (or in my case, driving) poop to the vet. Yep, you read it right - I took some of Emme's poop to the vet for examination to see if there were any parasites or abnormal bacteria present. That is "present" as in existing in NOT as in Christmas present! I am sure you don't want to ask how I got this sample. So, for those of you too polite to ask, I will tell you. I donned a glove (checking to make sure there were no holes in it!) walked out to the pasture and looked where Emme was standing for a puddle of poop - it was too loose to be a pile. But, I was out of luck, there was nothing around so I looked at her rear. By this time, Emme was sure something out of the ordinary was going on. First, I don't normally just walk out into the pasture during the day and talk to her. Secondly, she was very curious about the glove on my hand. Wouldn't you know, on her hiney was a stream of, you guessed it - poop. I matter-of-factly wiped my hand through it (the one with the glove on it) and backed up holding it carefully away from myself. Next came the tricky part, I took the glove off, turning it inside out as I did. And, voilá - the poop was safely inside the glove and I did not even have to touch it! I put the glove (poop and all) in a ziplock bag and drove it to the vet who looked at it under the microscope. I was glad my job was done - I would hate to have been the one to open that glove. Thankfully there were no parasites or bad bacteria which meant it was her diet. Cows have 4 stomachs and it is important that the rumen (the largest stomach) stays balanced with good bacteria and fiber - too much grain can cause an imbalance. The rumen is where the fermentation of their food occurs. The grass they eat goes through a fermentation process then the cow chews its cud or the result of the process. We had not changed Emme's food so the only thing I can attribute the imbalance to was mourning for Buttercup. I think her emotions caused an imbalance and she got into trouble. So, we gave her probiotics, cut back on her grain and made sure she had plenty of long green grass for fiber to eat. She is doing much better although her milk production has not increased very much. And yes, her poop is much firmer - Things sure change - I would never have believed that I would be saying THAT with such relief!