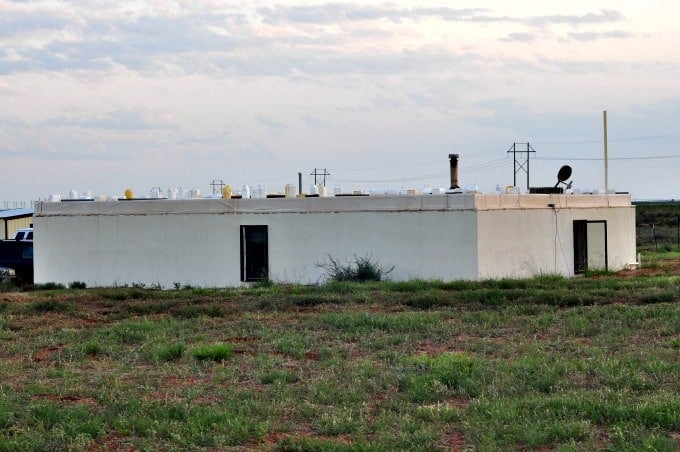 For a chronological listing of our building projects with ICF (or insulated concrete forms), be sure to look through the ICF Building Index. Hopefully, we are done with water leaks in the house! It will be so nice to enjoy a rainy day without worrying about mopping up puddles as the rain comes under the walls! I am now in Georgia visiting my mother and sister but before I left, the EIFS (exterior insulation finishing system) on the exterior house walls was completed! Since we are living in what will eventually be the basement of our home overlooking the vineyard, we wanted to wait to complete the exterior of the basement walls until the upstairs was finished. But, we got tired of puddles! So, what started as an effort to use up the EIFS materials that were left over from  building the barn, ended with completely finishing the walls of the house! We finished one wall of the basement and successfully used up the leftover EIFS materials. Shortly after the wall was finished, we had a rain - a big rain. And, guess what? The rain did not come in that wall like it had previously! So, we bit the bullet and did the whole exterior, even though, once the house is completed, three of the wall will no longer be visible. At least we will know, they will be water-tight! Here is a photo of the south east side of the house with the first layer of EIFS just beginning- you can see the left corner has the first layer of EIFS on it, along with a band across the bottom - it is the grey concrete strip seen against the yellow paint on the insulated concrete blocks. 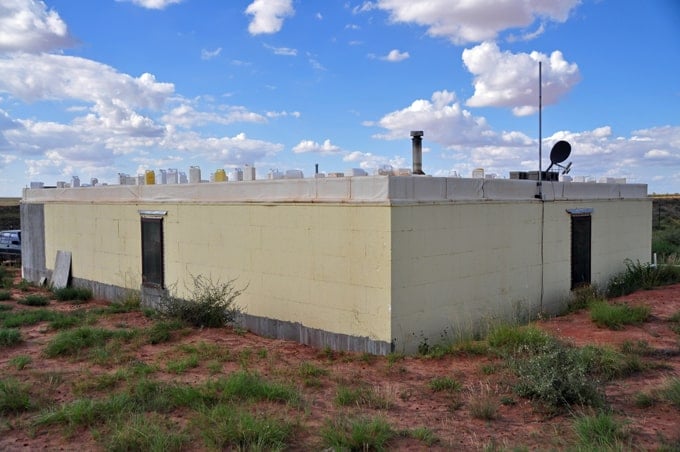 As you can see in the first photo, the final coat of the EIFS is just barely yellow - unlike the brighter yellow paint we had previously used to paint the insulated concrete blocks. The yellow now is so subtle that from a distance it looks like a creamy off-white. I like it! Yellow is my absolute, all-time favorite color! Everything big in my life has been yellow - my room growing up, our wedding colors, the nursery bedding for our babies, our Alabama house - you get the idea. Yellow is just a beautiful color so, why not stick with a good thing? As the work progressed the look of the house improved tremendously, to say the least! It does not look so much like a hovel now and in my mind's eye, I can already see it with the upstairs completed, dirt pushed around the basement walls and, well, it is beautiful. I can't wait until you can see it too! 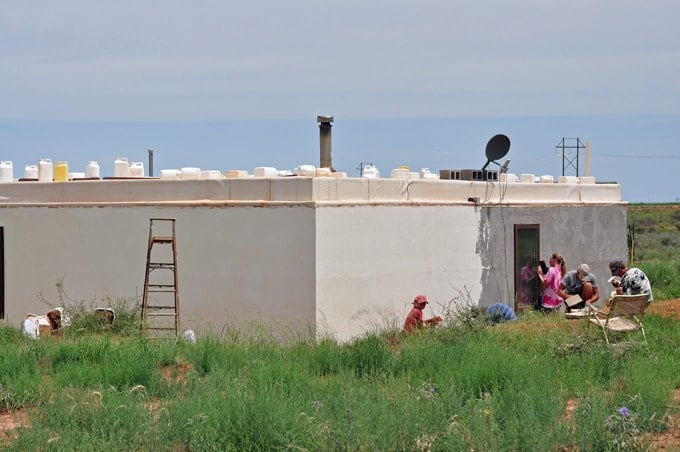 You might be wondering what is on top of the roof. Although at first glance, it could be mistaken for crenelation, you know, like the top of a castle - it isn't! They are jugs filled with water to hold the roof on  in the high winds of west Texas. Since everything under the roof is going to be used as the sub-flooring for the second floor, we did not want to nail or glue anything on top of the roof and lose the ability to re-use the building materials underneath. So, we put down Thermo Plastic Olefin (TPO) which is used for commercial flat roofing. John's brother Joe was able to get us a great deal on "ends" from a roofer in Tennessee - free! The TPO on the roof is glued down around the edges but, when the winds pick-up, so does the roof - literally! Seriously, the TPO gets an air bubble underneath and it rises up, threatening to blow away. Being the resourceful one, John collected the jugs from a local farmer and while they used to hold fertilizer, they now contain water and hold our roof down! Since I have been here in Georgia, they have had several rains which have given us over 1 inch of rain! That does not sound like much but for west Texas, it is great! And, NO water came in the house - YEAH!