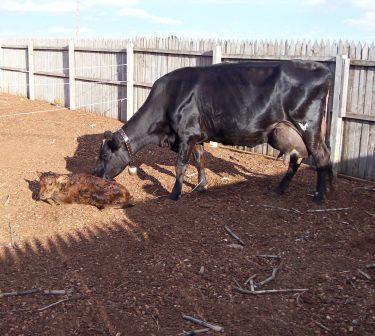 This has definitely been an exciting week around here with the flooding and now a new addition to the "family"! Buttercup, our family milk cow had a bull calf and thankfully, did it problem free. We knew she was close, in fact we thought she was overdue. In my zeal to keep our small house clutter free, I had thrown away last year's calendar which had the dates of her heat cycle and the dates we took her to an Angus bull for mating! We were expecting a calf the first of June! But last year, the month after we had taken her to the bull, she broke out and found her way to a neighbors Angus bull! - she is such a social butterfly ;) So, when she did not deliver in June, we figured the neighbor's bull was the father of the calf. We could tell from her behavior that she was ready but since last year's calving had taken quite a while, we went inside to eat supper. We have definitely relaxed - last year we were all outside in lawn chairs moving around the yard as Buttercup did, to watch her! We must have been quite a site! With such an attentive audience, no wonder it took her so long to calve! While the kitchen was being cleaned up, our 10 yr old went outside to check on her and was the first to see "Brownie". Thus named because he is a light brown color! He had the bone structure of an Angus rather than the jersey breed. As soon as he could stand and take a few steps, he was trying to follow us around like he was ready to play. Buttercup was not too thrilled about this but she sure liked all the praise we lauded upon her!

Last year, Buttercup had problems delivering the placenta. So, we planned to leave the calf on her for a few days hoping it would help in the delivery of the placenta. This time, however, she delivered it the same night. Since she delivered the placenta, Brownie was having trouble latching on, and Buttercup was frantic when taken in to be milked (even with John holding him at her head during milking) we decided to separate them the next day. This proved to be a wonderful move - Buttercup  is calmer and now easy to milk. 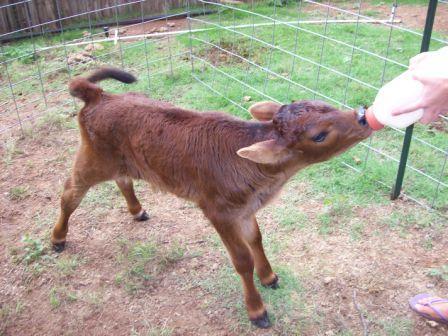 After some work getting Brownie to suck, he now eagerly takes his milk bottle. He flicks his tail like a happy little puppy while he eats. Buttercup is doing well and is increasing in milk production. Last year when she freshened we were getting 8 gallons a day (4 in the morning and 4 in the evening). Although the break from milking was very nice, not having milk for over a month has made everyone excited about it again! A wonderful book to read if you are interested in a milk cow is "Keeping a Family Cow" by Joann S. Grohman. This is my authority on cows and she warns owners to beware of letting the cow eat the placenta. Although it is suppose to be good for them, there is a chance of choking. This is exactly what happened with Buttercup. We thought she was going to die in front of our eyes! How would you do the Heimlich maneuver on a 900 + pound cow? Thankfully, she managed to save herself because I sure did no know what to do!