You may have met Buttercup in an earlier post, but in order not to offend any of the other backyard animals - here are our chickens. 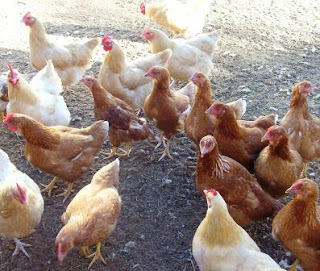 Another large expenditure I noticed in the "Food" category of my budget book was eggs. I was buying at least one of the big boxes of eggs (15 dozen) at Sam's Club a month. That is 180 eggs per month, 6 eggs per day! The obvious question was, "would having our own chickens be more economical?". Like Buttercup's milk and the freshly prepared dairy products it yields, yard eggs would be healthy but would they be cheaper than store bought? The answer, as you may have guessed since we have chickens, was "yes". After comparing the initial cost of the chicks and their daily feed, they are less than half the cost of store bought eggs. We have Buff Orphingtons and ISA Browns. Only the Buffs are laying at the moment, or better, should be laying! They have decreased from ~12 to only ~5 eggs per day. I think they know that their replacements are in the hen house and they have gotten lazy! As soon as the ISA's begin laying, chicken (Buff chicken that is) will be on the menu! They are funny creatures. Most of the day they are kept in a large fenced area. But at the evening milking time, we let them out to scratch in the yard. They help control the fly population by spreading Buttercup's "fertilizer" around. 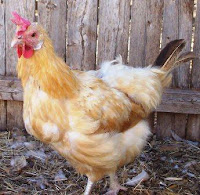 We have a couple that stand out from the rest.
Pequenna (which means "small" in Spanish) is slightly smaller that the other chickens. Because her crown flops to the side, she looks as if her hat is perched sideways on of her head. She also lays the only  white egg of the bunch so she in actually not a pure Buff Orphington. 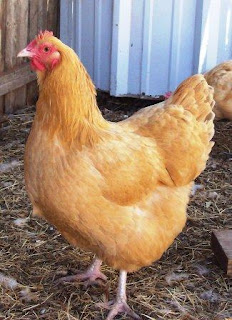 Ruffles would always walk around with her feathers ruffled, seemingly to dissuade our younger children from picking her up. Actually, she is very tame, easy to pick-up and seems to enjoy the attention.

Not only are we saving money having the farm animals, it has also provided wonderful new experiences. We have learned about the animals' habits, the care they require and most importantly our working together in different circumstances. For most of you, we have probably stretched our lives far beyond what you think is normal, possible or desirable. But, by keeping our own farm animals to lower expenses, we have also increased the quantity and quality of our poultry and dairy products. 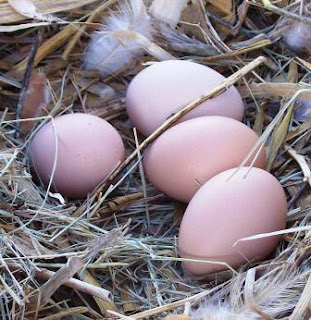 If you have any interest in chickens, check out the Backyard Chicken. It is a great forum to find answers to "all things chickens".
Tweet